Over one billion poultry and 37 million live cattle, pigs, sheep, goats and horses are transported across borders within the EU and to third states annually. This results in huge animal welfare problems due to lengthy transportation time and poor transport conditions. In particular, animals marked for slaughter are often transported for several days in unsuitable conditions, during which some sustain serious injuries or die. In addition, many animals are bred, reared and slaughtered in different locations, increasing the time that each animal spends in transport.

Since 2007, EU regulation 1/2005 for the protection of animals during transportation has been in force. However, this regulation is more than disputable and requires urgent amendment: As long as a vehicle fulfils certain conditions, it is permitted to transport pigs for 24 hours without a break and cattle for 29 hours with a one-hour break - the animals have to spend more than a full day in those trucks! Following vehement protests, the EU Commission has announced a revision of the regulation which however has been repeatedly postponed. 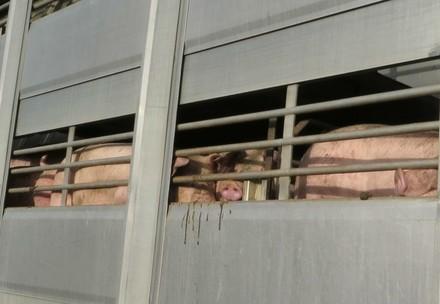 Our work and how you can support us