Vui, Nui, An, Teo, Tai, Tin, Khoi, Danh, and Thi were abused for cruel bile extraction in the past, as bear bile is considered a remedy in traditional medicine. Their ages are currently not known but they all spent at least 17 years suffering in tiny cages on the bear farms.

FOUR PAWS congratulates Binh Duong province authorities on their efforts to phase out bile bear farming in Vietnam and is calling on the Hanoi authorities to combat bear crime in their jurisdiction to finally end bear farming, where almost half of the remaining 317 bears on bear farms are kept.

All nine rescued bears were microchipped in 2005 when the government banned the intake of new bears as well as hunting, trapping, killing, selling, or advertising bears or bear products. However, keeping microchipped bears remained legal. Therefore, the bears kept suffering in tiny cages for almost two decades. After travelling 1,600 kilometres to Binh Duong province, the FOUR PAWS team brought the bears back to BEAR SANCTUARY Ninh Binh in another 42-hour journey. All nine bears are doing well, and now they have time to relax, recover, and get adjusted to their new surroundings.

“The rescue mission was a success, and everything went to plan, thanks to the hard work and dedication of our team. The journey back was long and obviously stressful for the bears although we try to make them as comfortable as possible. However, now they are safely at the sanctuary and already settling in, with soft beds, healthy food, enrichment and medical treatment. They suffer from an extensive array of ailments found in former bile bears, so we have our work cut out. The first months of care will be very intensive, but soon hopefully they will be enjoying a more bear-appropriate life alongside all our other rescued bears,”

Since 2005, the number of bears kept on bear farms has decreased from 4,300 to 317 in December 2021. 40 out of 63 provinces are already bear farming-free. However, capital Hanoi remains the country’s number one bear farming hotspot, with 158 bears kept in cruel conditions on 30 farms, and little to no progress in its efforts to end bear farming.

“All bears still kept on bear farms in Vietnam are suffering. They suffer from cruel keeping conditions and bile extraction, which is illegal, but still done. These bears are locked up in metal cages, often not much larger than the bear itself, lined up in dark sheds without any sunlight. Bears need to roam around, climb, dig, and swim. The remaining bears in Vietnam still have a chance at a better life, but only if all province authorities in Vietnam are fully committed to finally end bear farming in the country. To achieve this, especially Hanoi must step up its efforts,” says Magdalena Scherk-Trettin, who coordinates the FOUR PAWS bear projects.

Recent studies also show that bear bile consumers in Vietnam are willing to switch to non-animal-based products for the treatment of ailments, including herbal alternatives and Western medicine.

FOUR PAWS has been working with local partners since 2017 to rescue as many bears as possible from their sad fate. With its bear sanctuary in Ninh Binh, FOUR PAWS is supporting the Vietnamese government to contribute to an end of bear farming in Vietnam and provide a species-appropriate home for rescued bears. BEAR SANCTUARY Ninh Binh is not only a safe home for former bile bears, but also, an awareness and education centre for wildlife conservation in Vietnam. With the newly rescued bears it currently houses 48 Asiatic black bears. 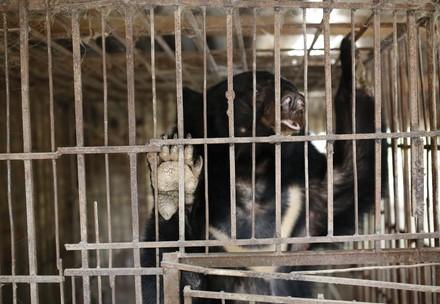 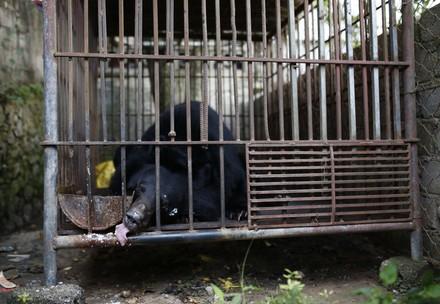