Lady M., as we call her, is one of the oldest bears we have in our care. She had a difficult start to her life, and was a dancing bear in Bulgaria, living in a yard of a special school. After her owners could no longer care for her, this sweet lady was transferred between zoos. Spending her days in behind metal bars.

Although there were attempts to put an end to this cruelty in 1993, sadly, as Bulgaria had nowhere for the authorities to keep the bears and law was not strictly enforced, Roma families were allowed to still keep the bears, under license, until a sanctuary was found for them. This meant that these bears endured suffering for much longer. It was only in 1998, that the training and dancing of bears was outlawed in Bulgaria.

The Bulgarian government approached FOUR PAWS and together with FONDATION BRIGITTE BARDOT, a suitable sanctuary for mistreated bears was built – a “heaven” called BEAR SANCTUARY Belitsa opened in 2000, up in the beautiful mountains, and in 2007, Lady M.'s life was changed when she was rescued by FOUR PAWS and transferred to BEAR SANCTUARY Belitsa. Her and the other bears rescue and transfer were the last ever old dancing bears of Bulgaria, marking the end of this cruel tradition forever in Bulgaria.

All her owners called her with different names, but all of them started with letter M: Masha, Misha, Mariana and so on. Therefore, her name is now Lady M.

Today, sweet Lady M. lives with another bear, Dobry. She is also blind, along with Dobry. She has had her ear cut off by someone long ago, but today she lives in peace and enjoys living out her days with grass under her paws and all the luxury she deserves.

Lady M. is doing well. Her fur has changed a lot over the years, she lost some fur around her nose due to her lack of nutrition in her previous life - but today she is looking great.

We can see her slowly coming out from hibernation for meals from time to time. For Valentine's Day, the caretakers decided to surprise her with some of her favourite treats.

They prepared the fruits and veggies in the shape of a heart as well hid some fish in a box, which she enjoyed a lot.

We have very sadly had to let go of Lady M., the oldest bear under our care. This was a very sad day at BEAR SANCTUARY Belitsa, following the decision that was made during a veterinary check last week.

The 43-year-old bear was brought to the veterinary clinic in Sofia, where CT scans revealed that she was suffering from severe arthrosis in her shoulder and hip joints. This very painful condition could no longer be alleviated with pain killers and her motility was highly restricted due to her overall condition. With heavy hearts, we had to let her go to prevent further suffering.

Lady M. lived a peaceful life here while enjoying her two favourite activities: sunbathing and swimming. She knew how to compensate the sad days from her past with the happy ones, as she relished every moment of her new life at the sanctuary.

Rest in peace lovely bear Lady M. We will never forget you and your special name that was as unique as you were! 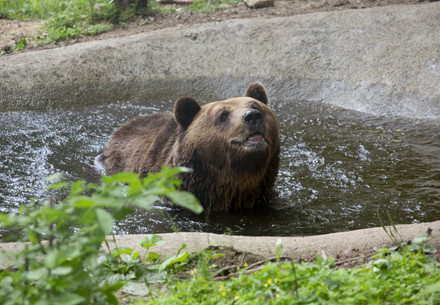 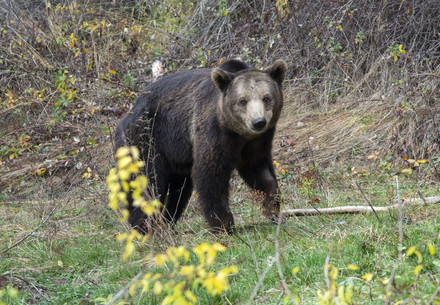 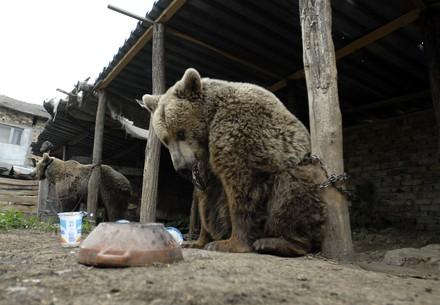 They 'danced' all their lives for tourists