In October, 2018 we went to a rescue mission to Albania to save Lenci and alongside the other wild animals form the Safari Park Zoo in Fier. Lenci was born in 2010 and most likely a brother of Bobby. He became most famous during the rescue mission due to a bad inflammation in his eye. Although we could save his eye, it is still smaller. Next to his eye, Lenci can also be recognised to his light-colored manes and striking lips.

International media called the Safari Park Zoo 'Europe's Worst Zoo' and 'Zoo from Hell'. It was a long process, but in the end: The Albanian Ministry of Environment and Tourism decided to confiscate all wild animals. FOUR PAWS supported the authorities and agreed to accommodate the lions and bears in its own sanctuaries.

After years of suffering under terrible circumstances, the lions can now finally start a dignified life. On 7th May 2019 the lions began their journey from Tirana to Nijeberkoop in the Netherlands, where FELIDA Big Cat Sanctuary is located. The FOUR PAWS team traveled 52 hours and nearly 3,000 kilometers to bring the lions to their new home. Lenci, Bobby and Zhaku are doing well: curious but careful, they explore their new environment.

Only two months after he arrived at FELIDA Big Cat Sanctuary, and for the first time felt sand and grass under his paws and the sun on his fur, we have to say goodbye to our beautiful Zhaku, much too early. His kidneys were damaged too badly. Kidney failure was already diagnosed in Albania and reconfirmed during the last medical check, but we still hoped that we could give Zhaku a good time with medication. This friendly and imposing lion, who lived for years in hell on earth, is no longer with us. Our hearts are broken for Zhaku, but we are certain he knew love and comfort in his last days.

July 2019: One morning we arrived at his enclosure, when Lenci suddenly couldn't stand up anymore. He tried and he fought, but his hind legs did not cooperate, and he continued to fall. We immediately contacted wildlife veterinarian Marc Gölkel, who urgently came to FELIDA Big Cat Sanctuary. Fortunately, we were able to visit the Drachten Dierenziekenhuis hospital in the short term for a CT scan, where Lenci was thoroughly examined. Long story short: Lenci appeared to have a hernia. Unfortunately, this investigation and also a large number of other diagnostic techniques did not find the cause of the sudden paralysis at the back. Neurological disorders in wild animals are very difficult to diagnose and treat, but we can now exclude at least a large number of diagnoses and await further results from specialists.

We did not know if Lenci will recover, but as long as there was a small chance, we would not give up. Lenci fights, and we fight with him. We support him with medication and observe him intensively, while we hope for the best.

August 2019: We are glad that Lenci is doing well so far. We can see that he feels better. However, we must bear in mind that his back will always remain a weak spot - just like with people who have had a hernia. We, therefore, keep a close eye on him and provide him with all the intensive care he needs.

February 2020: We are so proud of Lenci! By his looks you can see that, not that long ago, he was seriously neglected: the severe eye inflammation he had back then, damaged the nerves in his face, causing his eye, nose and mouth to be a little crooked. As a result he has an asymmetrical face. But this does not make him any less beautiful to us! And on the other hand, in his behavior, it is hardly noticeable anymore that he had such a difficult past. Lenci is a good-humoured and playful lion who loves all kinds of enrichment and happily roars along in the ‘lion choir’ consisting of Bobby, Ivan-Asen, Masoud and Terez.

April 2020: We must not forget that Lenci has only been at FELIDA Big Cat Sanctuary for less than a year, and so has only received the care he needs for a relatively short time after being locked up in a concrete cage for nine years without adequate nutrition and care.

A few days ago he suddenly fell ill again - he had troubles eating and was clearly in pain. The vets discovered that he had a cyst, that started in his jaw but had broken through his nasal cavity. Fortunately, the vets were able to completely remove the cyst and to rinse everything well.

Yet, this was an intense treatment for Lenci, and it took several days for him to recover. Lenci is doing better now. He is currently on antibiotics and we hope that, now that the inflammation has been removed, he will soon feel like his old self again.

May 2020: We celebrate welcoming him at FELIDA Big Cat Sanctuary exactly one year ago on 9th May 2019! The team at FELIDA describes Lenci as a friendly, funny and active lion that loves to play with all kinds of enrichment and shows the world every morning with his impressive roar what a majestic animal he still is!

Happy anniversary Lenci, we hope to enjoy your beautiful company for many more years to come.

January 2021: Last weekend, we were able to bring Lenci to an animal clinic and together with wildlife veterinarian Marc Gölkel from IZW Berlin, CT scans were made of Lenci's head and back, a rhinoscopy was done and blood samples and biopsies were taken. Luckily, no changes were found in his back; Lenci's weak spot. In his jaw and nasal cavity where we removed a cyst last year, some agitated spots were observed. We have to wait for test results before we can further discuss the best possible treatment for Lenci with the specialists.

Just when we thought we could look back on an intensive but successful day with relatively good news, something very unpleasant happened... While Lenci, back at FELIDA, awakened from the anesthesia, he bit his tail. The injury required our vet to treat Lenci again right away. A tail is vulnerable, as it can be hard to ‘fix’ and we had no other option than to remove the damaged piece. Vet Gölkel was able to stitch the wound and Lenci will now have to recover not only from the veterinary check, but also from this misfortune.

When all hope of improvement is lost, we need to be strong and provide the hardest kind of care that is left: preventing further suffering. Unfortunately, this is an important part of the responsibilities at our FELIDA Big Cat Sanctuary as a special care sanctuary for traumatised animals. So, it is with great sadness that we let you know that our brave fellow Lenci is no more.

Lenci has been through so much in his life, and he had to fight so hard. Thanks to specialised care, he slowly recovered and visibly enjoyed the grass under his paws, the sun on his fur, the enrichment to play with and the peace around him. But his health remained fragile, because the many years of suffering on a concrete floor in a small cage, in damp and unsanitary conditions, without proper care, had left deep and indelible marks.

Recently, Lenci’s cheerful behaviour changed and he seemed to be in pain. Medical examination, including a CT scan, found that he was suffering from a chronic, very painful inflammation in his nose area that would spread further, causing more pain. Long-term treatment would not resolve this problem and we saw him weaken under his tough, majestic appearance. Lenci was exhausted, his troubled past caught up with him, and the will to fight was gone.

We are very sad that we had to let him go, but also relieved that his fight is over. Thanks to you he got a second chance and knew peace, love and joy for the first time in his life. 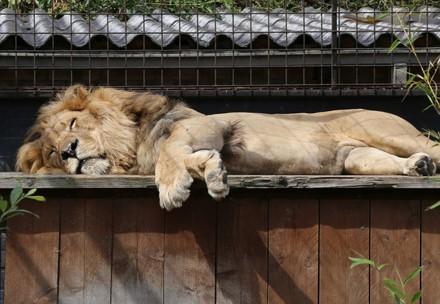 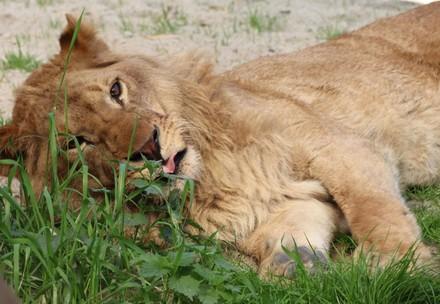