For sixteen long years, bear Tyson suffered in a dilapidated cage at a remote hunting station in western Ukraine, where we assume he was illegally exploited for bear-baiting. Finally the wait was over, and suffering became a thing of the past. On 16 October 2017, Tyson was rescued and taken to his new species-appropriate home at our BEAR SANCTUARY Domazhyr.

“Tyson was brutally snatched away from his mother as a bear cub and brought to a hunting station. Typically, at such stations, hunting dogs are trained to attack bears in a practice known as ‘bear-baiting’.”

After long negotiations with the owner, the team managed to load Tyson into a transport crate and drive him to his new home, a journey of approximately five hours. He was released into an indoor enclosure and after a short adaptation phase under close monitoring, he was soon able to explore his outdoor enclosure of 1,000 m².

“I'm surprised and relieved that after sixteen years in extremely bad keeping conditions Tyson is not suffering from any very serious medical conditions. The most severe are his dental abrasion and weak muscles. He will recover well in FOUR PAWS BEAR SANCTUARY Domazhyr.”

Dr. Frank Göritz from the Leibniz Institute for Zoo and Wildlife Research (IZW) accompanied the transfer.

FOUR PAWS has constructed a bear sanctuary near the Ukrainian city of Lviv. BEAR SANCTUARY Domazhyr currently covers 7.7 hectares and provides a species-appropriate home to bears rescued from deplorable keeping conditions. Over the next few years, the sanctuary will be extended to cover twenty hectares, with space for thirty long-suffering bears. By constructing BEAR SANCTUARY Domazhyr, FOUR PAWS has created a sustainable home for rescued bears, and is thus assisting the Ukrainian government in its efforts to implement the ban on keeping bears for bear-baiting.

After lenghty observation of the behaviour of bears Tyson and Mashutka, the team at our BEAR SANCTUARY Domazhyr decided to socialize the bears. Both were rescued last year and have made incredible progress since then. When they met each other it was friendship at first sight: they greeted each other with what almost looked like a kiss. Soon Tyson relaxed, becoming his lazy self, while Mashutka showed more curiosity, observing Tyson from the undergrowth. We have yet to see if this attempt at socialization will succeed long-term, but signs are looking good. 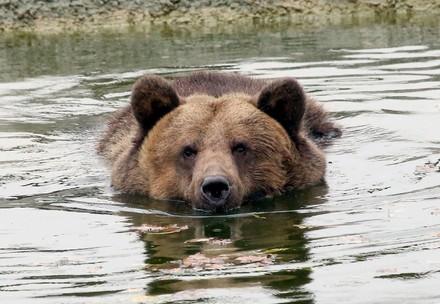 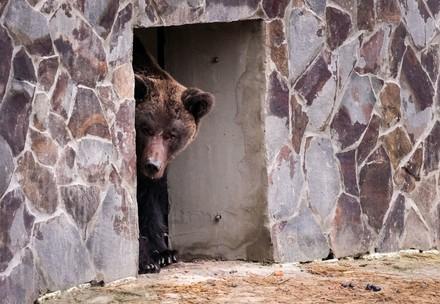