Violeta is one of our oldest bears living at our DANCING BEAR PARK Belitsa in Bulgaria which is run together with Fondation Brigitte Bardot. Although she may not be the prettiest of our bears, that is not her fault.

Violeta was certainly a beautiful bear before humans pierced her nose without any anesthesia, tied a metal chain to her sensitive nose and abused her as a so-called dancing bear. Again, and again her nose was pierced. Again, and again she was pulled by the metal chain that was attached to her skin. Again, and again the pulling and wrenching tore the skin inside her nose and jaw, leaving behind deep wounds and loose flaps of skin. These wounds are still visible and cannot heal any more.

Although there were attempts to put an end to bears dancing in 1993, sadly, as Bulgaria had nowhere for the authorities to keep the bears and law was not strictly enforced, Roma families were allowed to still keep the bears, under license, until a sanctuary was found for them. This meant that these bears endured suffering for much longer. It was only in 1998, that the training and dancing of bears was outlawed in Bulgaria.

The Bulgarian government approached FOUR PAWS and together with Fondation Brigitte Bardot, a suitable sanctuary for mistreated bears was built – a 'heaven' called DANCING BEARS PARK Belitsa opened in 2000, up in the beautiful mountains.

Her scars are the indisputable evidence of Violeta’s brutal past, where she was found neglected under the poorest keeping conditions you can imagine. Years of malnutrition have affected her outer skin and fur. Every year after hibernation, Violeta loses patches of fur, mainly around her face. But despite those visible wounds, the old lady is a fun-loving bear who feels very comfortable at her forever home.

She is quite quiet and you can tell that she wants to enjoy the rest of her life to the fullest – in peace and quiet!

Violeta is feeling more relaxed these summer days. Her eyesight is weakened over the years and now Violeta is blind, therefore she usually smell the ground first and afterwards will find the food. Her favorite meals has to contain nuts and grapes.

In the early days, Violeta used to walk with a lot of confidence but it seems like recently she is slowing down a bit! Previously during her daily routine, she would walk through her entire enclosure (27,865 square meters), whilst recently she is spending more time near the pond, in the upper part of her enclosure. One of her favorite spots to spend some relaxing time is lying under the shades of the trees.

Violeta is one of the oldest bears at the sanctuary, and based on her daily behavior, the team on site decides to have regular check-ups for her.

At 39 years old, Violeta was one of the oldest bears living at DANCING BEARS PARK Belitsa in Bulgaria, which FOUR PAWS runs together with Fondation Brigitte Bardot. She was abused in the name of entertainment, forced to dance for tourists, having a ring through her sensitive nose attached to a chain. Again, and again the pulling and wrenching tore the skin inside her nose and jaw, leaving behind deep wounds and loose flaps of skin.

Years of malnutrition have affected her outer skin and fur. Every year after hibernation, Violeta lost patches of fur, mainly around her face. But despite those visible wounds, Violeta was a very happy, lovely and active bear! Although she became almost completely blind in her older years, she still enjoyed exploring her environment curiously and spending her days sleeping by the pond with her favourite food. Unfortunately, a veterinary examination showed that the bear lady had tumours and heart disease. With broken hearts, we therefore had to say goodbye to Violeta. Her beautiful memory will live with us forever! 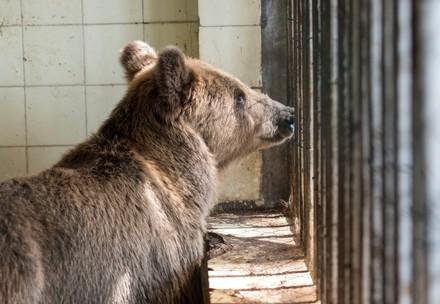 New home for one of Europe's saddest bears 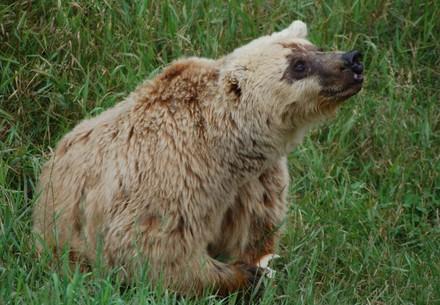 After many years of 'dancing', this girl can spend her days in peace