Every year, billions of live animals are transported for days or even weeks to be exported to other countries. The animals suffer from exhaustion, heat, cold, hunger and thirst. Numerous animals are completely dehydrated, and many of them die during or after the transport due to the horrifying conditions. FOUR PAWS is working intensively to change existing legislation to achieve an end to long-distance live animal transports and such to third countries.

Time to change the rules: white paper guides the way for revising the legislation on live animal transports

The EU-wide legislation regarding the transport of live animals is finally going to be revised in the coming years. This decision was taken, among others, thanks to intensive campaigning led by animal welfare organisations. FOUR PAWS is working intensively on this topic and sees the revision of the EU Regulation (EC) 1/2005 as a chance to finally bring an end to cruel transports of live animals. We aim to completely ban live animal exports to third countries, ban long distance transports and reduce 'animal production' in the EU.

On January 27th 2021, our partners, Eurogroup for Animals, presented our joint demands of their members for revising the EU Transport Regulation 1/2005 in the form of a Whitepaper.

FOUR PAWS has contributed to this catalogue of demands and supports the demands. Some of the demands expressed in the Whitepaper are:

Committee of Inquiry on the Protection of Animals during Transport  (ANIT)

An EU committee of inquiry on animal transports meets regularly since September 2020. The decision to establish the committee was taken in June 2020.
The committee of inquiry takes a close look at the failures of the European Commission and the EU Member States in implementing and enforcing the animal protection requirements on live animal transports. The systemic and recurrent abuses that animals endure every day are brought up for discussion on the highest political level of the European Union.

To date, several hearings have taken place in which experts discussed different topics. Pierre Sultana, Director of the European Policy Office of FOUR PAWS held a presentation on the problems of long-distance transports within the EU. You can find the presentation and the written answers to questions of Members of the European Parliament here!

Representatives of the European Commission and representatives of the countries currently holding the Presidency of the EU Council are also speaking in the ANIT committee. The committee of inquiry will continue until end of 2021, after which a final report comprising all results will be published. The report's findings will play a role in the future revision of the existing EU Transport Regulation. In any case, these findings will provide the basis for further measures that need to be implemented urgently by the EU Commission and the Member States to end the countless systemic breaches of already inadequate animal protection provisions. FOUR PAWS works intensively towards an end to animal transport outside the EU and to all long-distance animal transports. Instead of live animals, only meat and genetic material should be transported. 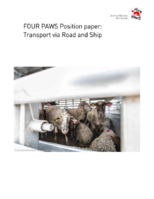