“Since the EU member states have closed their borders to contain the novel coronavirus from spreading further and increased controls on the movement of goods have been set up, we have received reports of miles of traffic jam at the borders. Animal transporters are also caught up in these traffic jams. Squeezed together in lorries, chickens, cows and pigs are transported across the EU and to neighbouring countries. They are exposed to immense stress.

The traffic jams mean additional hours of waiting time for the animals, for example at the German-Polish or Bulgarian-Turkish borders. The animals are often crowded in the small spaces and in many cases have no access to water. We receive reports of screaming cows on transporters. This suffering can be prevented.

The solution is simple: The transport of live animals across borders must be stopped for the duration of the corona pandemic. Instead of live animals, only exports of refrigerated or frozen meat should be transported. Veterinary officials and police in EU member states have neither the time nor the resources to ensure proper compliance regarding animal welfare laws during the coronavirus crisis.

Together with other NGOs, FOUR PAWS has sent a letter to the responsible EU Ministers and the EU Commission, calling on them to act now and stop cross-border live animal transports immediately. In view of the current situation in and outside Europe, the responsible authorities are obliged to ban transports if animals could be subjected to undue suffering during transport. This is currently the situation at the borders.

We therefore call on decision makers to stop all exports of live farmed animals by land and sea to non-EU countries. Ships arriving in ports outside the EU may not be allowed to unload the animals when countries close their borders. Furthermore, we also demand that live animal transport between EU member states must not exceed a duration of eight hours.” 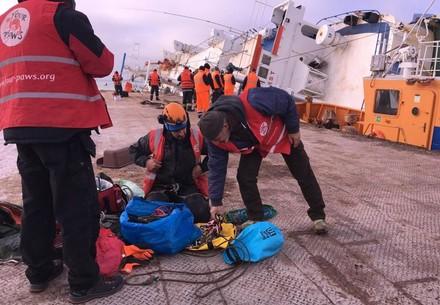