13 January 2022, Brussels – A petition calling for an EU ban on the live export to third countries of farmed animals with 900,000 signatures were today, submitted to the European Parliament by global animal welfare organisation FOUR PAWS, Compassion in World Farming (CIWF), WeMove Europe and Animals International. The joint petition calls on MEPs to strengthen the recommendations by the Committee of Inquiry on the Protection of Animals during transport (ANIT) to also support a transport ban of unweaned animals and a maximum journey time on long-distance transports of eight hours for adult bovine, swine and ovine animals and four hours for poultry and rabbits.

The submission comes just days before a crucial vote by MEPs on recommendations following the inquiry into the protection of animals during transport within and outside the EU. This could result in a strong message from the European Parliament to the Commission to limit journey times and prevent the immense suffering this trade causes to millions of farmed animals across and beyond Europe every year.

In December, ANIT members voted for recommendations focusing on the enforcement of existing rules instead of stronger measures that would ultimately ban exports to third countries. This would still allow the cruel and unnecessary long-distance transportation of live animals to countries in which the EU has no means to ensure that animal welfare standards are respected. The one million signatures were handed over to MEP Tilly Metz, Chair of the ANIT Committee and President of the Intergroup of the Welfare and Conservation of Animals in the European Parliament.

“The members of the European Parliament need to listen to its constituents and should consider the 0-4-8 principle in its vote: 0 hours of transport for vulnerable animals, such as unweaned calves, 4 hours for poultry and rabbits and 8 hours for adult bovine, ovine and pigs as a maximum transport time! Longer transports, exports of live animals and transports by sea need to be banned altogether."

Stronger rules should be put in place

Under current rules, pigs can be transported for 24 hours non-stop and sheep and cattle for 29 hours with just a one-hour ‘break’. At the end of such journeys, a 24-hour break is mandated, but following this break, the cycle can be repeated as often as it takes until the animals arrive at their final destination, to the extent that they can be on the move for several days or even weeks.

“900,000 European citizens are sending a clear message to the EU through our petition that these long and unnecessary journeys are cruel to farmed animals and should be banned,” says Olga Kikou, Head of Compassion in World Farming EU. “We urge MEPs to listen to this citizens’ call and to show ambition by going beyond the ANIT Committee’s recommendations, aiming at improving the lives of millions of farmed animals. Stronger rules setting absolute journey time limits and specific measures for vulnerable animals should be put in place to prevent the suffering and agony experienced during these journeys.”

“When taking forward their responsibilities as representatives of the European citizenry, MEPs should also take heed of mass mobilisations and actions as the voice of their constituency. Europeans are sending a clear message to the Parliament from all corners of the EU: we’ll be taking note of whether their demands are listened to,” says Virginia López Calvo, Senior Campaigner at WeMove Europe.

“There was much talking about live export while I was in third countries seeing no change at all in how European animals are being treated. This trade cannot be improved. It cannot be humane. It must be stopped for good,” says Gabriel Paun, Director of Animals International.

On 17 January, supporters of a ban all over Europe will be taking part in a Twitterstorm to amplify this message before the Plenary vote, which will take place on 20 January.

Every year, millions of animals are transported over thousands of kilometres - by air, sea or land - to be slaughtered or fattened for slaughter. During these journeys, they suffer tremendously due to stress, exhaustion, over-heating and injuries. Even unweaned calves are transported from the age of 14 days on long journeys, suffering hunger, thirst and thermal stress which heavily impacts their weak immune system. Nor is any special care given to pregnant animals, which sometimes end up giving birth in terrible conditions on board vehicles or ships. 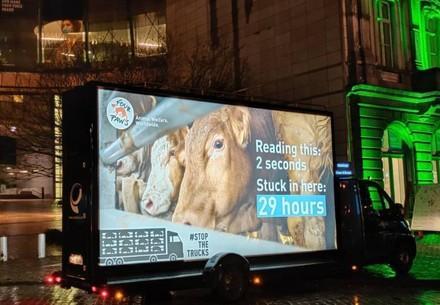 Action in Brussels: 29 hours of suffering in the heart of Europe 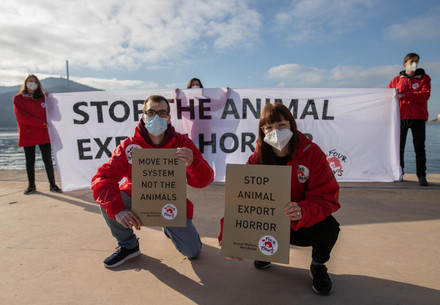 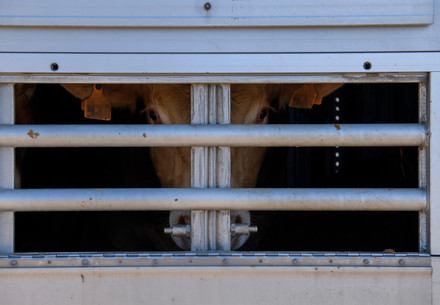