24 March 2022 – Global animal welfare organisation FOUR PAWS has successfully rescued and transferred a 20-year-old Ukrainian ‘restaurant bear’ to its BEAR SANCTUARY Domazhyr near Lviv in Western Ukraine on 23 March. FOUR PAWS had been planning to rescue male brown bear Vova since last November but his fate was a court matter prior to the outbreak of the war.

It seems he had to endure all of his life in a tiny concrete cage near a recently burned down restaurant in the Khmelnytskyi region, also in Western Ukraine. Vova was not harmed in the fire but his living conditions and safety became even more unstable, so that the owner handed him over to the authorities voluntarily and the rescue was finally possible.

The transfer of Vova to BEAR SANCTUARY Domazhyr was done by an external transport partner. A local veterinarian accompanied the transfer to check on Vova’s wellbeing.

“Vova has arrived safely at our sanctuary. We are grateful that the authorities finally made his rescue possible. Bears need to roam around, dig, and swim, not pace back and forth on the same few square metres all of their life. Vova’s stereotypical behaviour shows that he has been bored and unable to live out any natural behaviours. Our team at BEAR SANCTUARY Domazhyr will now make sure Vova receives all the care he needs to recover and live a species-appropriate, bear-worthy life,”

The keeping of bears in private captivity is still legal in Ukraine, however, due to the changes in the Ukrainian Law “On the protection of animals from cruelty” in November 2021, the keeping of bears and big cats for leisure and entertainment purposes became illegal. For this reason, Vova’s keeping became illegal and his fate became the subject of a court decision, however, the court rejected the case twice. After the war broke out in Ukraine, FOUR PAWS was contacted by the responsible authorities and asked to take him into its care as soon as possible.

At the beginning of March, BEAR SANCTUARY Domazhyr already welcomed seven bears from White Rock Bear Shelter near Kiev, which is run by the FOUR PAWS partner organisation Save Wild Fund, in an emergency transfer. As Kiev is heavily affected by the war, a local transport company brought the bears to the FOUR PAWS sanctuary in the safer western part of the country. BEAR SANCTUARY Domazhyr provides a temporary home for four of the bears. The three others have since been transferred further to bear sanctuaries in Germany.

A species-appropriate home for rescued bears

FOUR PAWS is deeply concerned about the war in Ukraine, and closely monitoring the developments, especially as attacks have been reported in the western part of the country as well. The staff at BEAR SANCTUARY Domazhyr and the bears are currently safe and doing well given the circumstances. 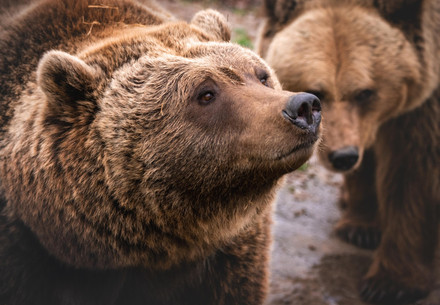