17 June 2021 – Since Vietnam banned the sale and possession of bear bile in 2005, the number of bears kept on bear farms has decreased from 4,300 to 350.However, popular tourist destination and capital Hanoi remains an embarrassment as the country’s number one hotspot of bear farming, with 161 bears kept in cruel conditions. Many of the bears, mostly Asiatic black bears, are still used for bile extraction as demand for bear bile products in traditional medicines is still widespread across Vietnam. Global animal welfare organisation FOUR PAWS, together with its ‘Bear Coalition’ partners Education for Nature Vietnam (ENV) and World Animal Protection (WAP), is launching an international petition on 17th June, calling on the Vietnamese government and Hanoi authorities to better enforce regulations on bear keeping and for the capital to end bear farming for good.

After the sale and possession of bear bile was made illegal in Vietnam, the remaining bears on farms and in private keeping had to be registered and microchipped. Unchipped bears are now considered illegal and are confiscated, while registered bears remain in the care of their owners until they die or in some cases are handed over voluntarily to sanctuaries. While many provinces have been working hard to expedite the end of bear farming, authorities in Hanoi have been mostly inactive.

“The majority of the country’s bear bile-free provinces have proven their determination by monitoring and inspecting bear farms, addressing cases of detected violations, and confiscating illegally kept bears. They have also been convincing bear farmers to do the right thing by voluntarily giving up their bears so they can have a species-appropriate life in sanctuaries, such as our BEAR SANCTUARY Ninh Binh. By remaining inactive, Hanoi reflects poorly on the Vietnamese government’s efforts to end bear farming for good and compromises the rest of the country’s progress. We call on the government to take responsibility for the situation in Hanoi and act now.”

Over 1,2 million supporters worldwide have voiced their support for an end to bear farming in Vietnam by signing a petition that FOUR PAWS launched in 2017 along with its #saddestbears campaign, calling on the Vietnamese government to take greater steps to expedite the end of bear farming. While FOUR PAWS closed the petition addressing the nationwide issue, the fight against bear farming in Vietnam is not over. Despite significant progress being made across the country, Hanoi still accounts for 161 bears on 31 farms – almost half of the total number of bears on farms and in private keeping in Vietnam. “Vietnam has already taken positive steps by banning the sale and possession of bear bile but more needs to be done to finish the job and end bear farming for good. With the launch of our new petition, we aim to draw national and international attention to Hanoi, which as the country’s capital should be setting an example, instead of creating an embarrassment for Vietnam on the global stage,” says Van Genne.

Many of the bears on Vietnam’s bear farms have come from the wild, where poachers often kill female bears to catch the cubs and bring them onto farms. Asiatic black bears are native to Vietnam and on the brink of local extinction because of poaching and the illegal wildlife trade where demand for their parts and derivatives remains. While there are herbal and synthetical alternatives to bear bile and demand is reportedly declining, hundreds of bears are still suffering in tiny cages. Many of the bears are unable to move around in the cramped cages and they suffer excruciating pain during regular bile extractions. Since the opening of its BEAR SANCTUARY Ninh Binh in Vietnam in 2017, FOUR PAWS has rescued 49 Asiatic black bears, mostly from bear farms but also from private keeping and wildlife trafficking.

Overview of FOUR PAWS help for bears in Vietnam 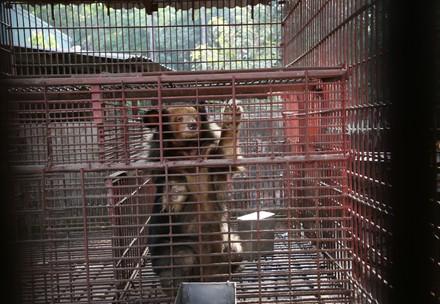 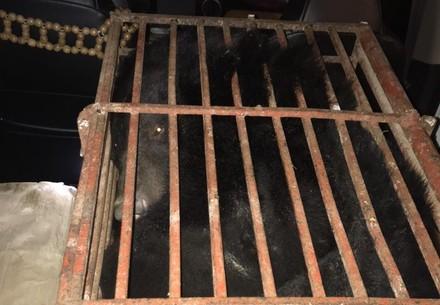