The experienced team of veterinarians and wildlife experts managed the logistical challenge of getting the four tigers out of the train carriage, into the transport crates and on a truck that brought them to the airport.

Before their departure, the tigers were given names honouring their origin – one of the male tigers even received the name of famous Argentinian football star Lionel Messi. Now all four tigers are en route to South Africa, where they will find a species-appropriate home at LIONSROCK Big Cat Sanctuary, which is run by FOUR PAWS, and set their paws on grass for the first time ever.

Mission leader and FOUR PAWS veterinarian Dr Amir Khalil and his team worked tirelessly for months to find a new home for the tigers and prepare them for the transfer. They acquired permits, coordinated logistics with the local authorities in Argentina and South Africa and ensured the transport crates are best equipped for the long journey towards a tiger-worthy life. By using positive reinforcement to make the tigers enter the transport crates voluntarily on the rescue day, the team minimised the potential risk of anaesthesia.

“These tigers spent over 15 years in the same 75m² space, surrounded by the same landscape and without any stimulation of their instincts or natural behaviour. Our team needed to be around them so they would stay calm in our presence and during the transfer. It was and still is a stressful situation for the animals but we made them as comfortable as possible. For us, the wellbeing of the animals always comes first. We put soft floors, air holes, and water containers in the transport crates and will check on them during the flight layover. The team will keep a particularly close eye on the oldest tiger because of his advanced age,”

The rescue of the four tigers marks the first rescue mission done by FOUR PAWS in South America.

“Having seen how confined these tigers have lived for such a long time, knowing that they had spacious nature right in front of them but were never able to step beyond the train carriage floors, was overwhelming. It will be fantastic when they first step on grass and explore their new spacious home at LIONSROCK. We are grateful for all the work the Argentinian authorities, the Ministry of Environment and Sustainable Development, and our local partners have put into making sure the tigers can finally find a species-appropriate home. We hope this good cooperation will lead to a lasting relationship which will help us save the lives of as many animals as possible, in Argentina and worldwide,” says Luciana D’Abramo, Chief Development Officer at FOUR PAWS, who is Argentinian herself.

During the preparation process for the rescue, the FOUR PAWS team gave names to the tigers with the help of their online community. The aim was to give all four tigers names with relevance to the country they come from – Argentina. The majority of votes decided that one of the younger male tigers will be called ‘Messi’, like famous football player Lionel Messi. The FOUR PAWS team has already extended an invitation to tiger Messi’s human namesake to visit him and his companions at LIONSROCK Big Cat Sanctuary.

LIONSROCK: A home for over 100 rescued big cats in South Africa

LIONSROCK Big Cat Sanctuary, one of eleven wild animal sanctuaries established by FOUR PAWS, near Bethlehem, South Africa is home to over 100 animals, most of which are big cats rescued by FOUR PAWS from war-ravaged zoos, circuses, private ownership, and the canned hunting industry. The sanctuary provides a species-appropriate, lifelong home for the mistreated big cats who cannot be released back into the wild.

The habitat offers highest standards including large areas for family groups, facilitation of natural behaviour through enrichment and highest standards of medical care as well as highest security standards of enclosures. In LIONSROCK hunting, trading or breeding of big cats is strictly prohibited. Moreover, interactions between wild animals and visitors are prohibited as well. 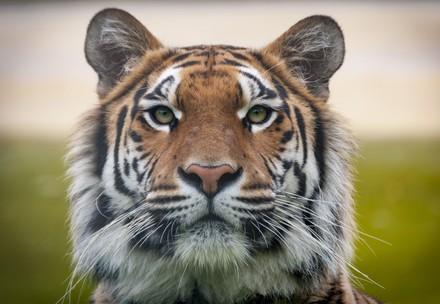 Tigers in Care of FOUR PAWS

Images of our beautiful rescued tigers at our sanctuaries 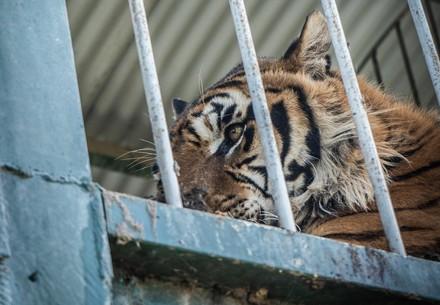 Stuck in an abandoned train carriage in Argentina for 15 years