The international animal welfare organisation FOUR PAWS conducted the first comprehensive medical examination on the two tigers rescued from Syria on 28 March 2018. In July 2017, a FOUR PAWS team evacuated the big cats Sultan and Sayeeda, along with eleven other animals, from a neglected zoo near the war-torn city of Aleppo. Three months later, the tigers were transferred to the Dutch Big Cat Centre FELIDA run by FOUR PAWS. The animals were in such bad shape that a thorough examination was only possible after months of trauma therapy.

The hardships of the past left their mark on Sultan and Sayeeda. Both big cats were in such a fragile state of health during and after the rescue from Syria that the first extensive check-up could only be performed now. The team of veterinarians examined the eyes, skin and fur, paws and teeth of the animals. In addition, blood tests as well as X-ray and ultrasound examinations of the skeleton and internal organs were made. "Both tigers have kidney problems because they did not get the proper nutrition or enough water for a long time. We now have to keep an eye on the kidneys because they often cause problems for big cats. Sultan also has a weak heart - shortly after his rescue he even suffered a cardiac arrest. Overall, both animals have recovered well and their condition has improved significantly," explains Dr. Frank Göritz from the Leibniz Institute for Zoo and Wildlife Research (IZW), who already accompanied the rescue of the tigers. Soon, first attempts will be made to socialize Sultan and Sayeeda. Therefore, it was necessary to castrate Sultan.

Scars from a painful past

FOUR PAWS rescued the tigers Sultan and Sayeeda along with other zoo animals from the neglected zoo of the "Magic World" amusement park near Aleppo on July 21, 2017. In what was an extremely challenging mission, FOUR PAWS brought all former zoo residents across the Syrian-Turkish border to a sanctuary in Karacabey near the Turkish city of Bursa. There, the injured and traumatised animals received first aid.

In October 2017, the two tigers were transferred to The Netherlands. "We are satisfied with the results of the check-ups. Sultan and Sayeeda's health has not only improved physically, but their behavior has also developed positively. However, they still need intensive care and we hope that we can bring them to a larger sanctuary at some point in the future," says FOUR PAWS Big Cat Expert Barbara van Genne.

Sultan and Sayeeda will be able to continue their recovery in the species-appropriate surroundings at Big Cat Centre FELIDA in Nijeberkoop in The Netherlands. The team at FELIDA is specialised in caring for animals who need special attention, often due to psychological and physical trauma. This includes intensive monitoring of their behavior and wellbeing. Individual enrichment, training, enclosure furnishing and medical care are adjusted to the animals' needs. FOUR PAWS plans to expand FELIDA to accommodate more rescued big cats in the future. 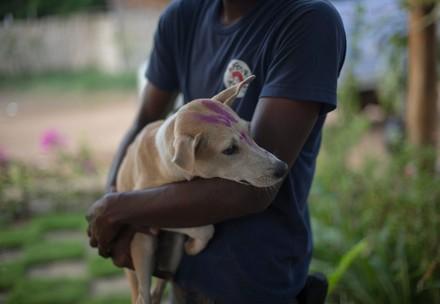 Over 50,000 dogs and cats vaccinated in Myanmar: FOUR PAWS surpasses first crucial goal in the fight against rabies