In May 2014, a low-pressure cyclone affected Southeastern Europe, causing heavy floods and landslides in a large area of the Balkan region. The town that suffered one of the greatest damages was Obrenovac, Serbia, accounting for the highest number of victims and forced displacements. FOUR PAWS acted immediately to the emergency and provided disaster relief to animals and people most affected by the floods in this area.

One of the survivors was a young, dark-brown-coated street dog. When the floods finally stopped, he found a safe and dry place near a local supermarket called Super Bomi. This also happened to be the place where our team dropped by regularly during the rescue mission. As if the dog knew who to befriend, he spent a lot of time with the team. Being so loyal to them, he even ran after their car every time they needed to leave again.

After having stayed an entire week by their side, the team knew they just could not leave the poor dog behind, and he was adopted by team member Iulia. Inspired by the name of the local supermarket, the dog was named Bumi. A local veterinarian helped the team out with vaccinations and health checks for Bumi. One month later, his quarantine period at the shelter was completed and Bumi was ready to go to his new home in Romania!

Despite having endured many hard years on the streets and one of the worst natural disasters in Serbia, Bumi adapted incredibly fast in Iulia’s home and managed to get along well with the other two dogs and three cats in the house. He has shown to be loving, patient and very affectionate towards everyone around him. After a while it became clear that Bumi was an excellent candidate for the Animal Assisted Interventions (AAI) project, which was already successfully running for a few years in Bucharest.

Many months of positive training sessions and treats later, Bumi was more than ready to start supporting children in therapy sessions in 2018. As resilient as Bumi is, he adjusted well to his new role and is now enjoying his life as a therapy dog, as well as being a loved pet.

Bumi likes one on one sessions with children and being active in agility exercises, but even more he enjoys visiting the elderly at the 'Floare Rosie' home and participating in 'No Stress with FOUR PAWS' activities. He simply never gets enough of petting and receiving lots of treats from many different people. The role of therapy dog fits Bumi perfectly, and he does a great job in helping vulnerable people in need and showing the community that former stray dogs can be perfect companions.

The FOUR PAWS AAI Programme in Romania was launched in 2004 with the 'Dogs for People' team training former stray dogs to become therapy dogs in special centres for children with disabilities. In 2012, the project extended to nursing home 'Floare Rosie' in Bucharest, where elderly patients interact with the therapy dogs who help them reduce their anxiety, depression and loneliness. Four years later, FOUR PAWS opened the first Animal Assisted Therapy and Research Center in Bucharest and also launched the 'No Stress with FOUR PAWS' project, providing stress relief for students and company employees through animal assisted activities. 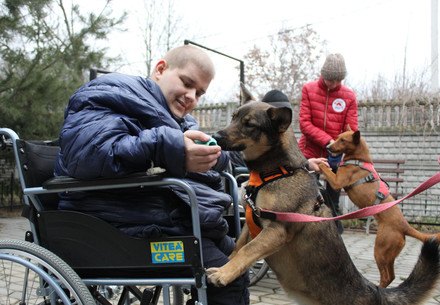 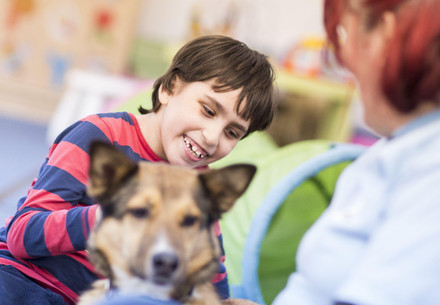 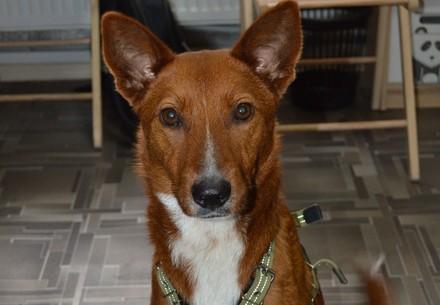