Like many of the Asiatic black bears left in Asia, bear Cam spent a lifetime locked away in a small cage on a bile bear farm. Far, far away from the natural life or existence of any bear. He suffered in silence for his bile – used for generations as a Transitional Chinese Medicine. But Cam is one of the lucky ones, his owner voluntarily gave him away, and he is able to begin a new stage of his life at our BEAR SANCTUARY Ninh Binh.

Although he was handed over to us, our team and the bear didn't get the time they needed to calmly walk him into the transport crate. Since our experienced staff is full of heroines and heroes, they made the best of the situation as well as the short time and succeeded with this challenging and rushed mission. Just a short drive away was our BEAR SANCTUARY Ninh Binh, where Cam and the team arrived safe and sound. Cam then underwent time in the quarantine station, where he received veterinary care from FOUR PAWS Viet veterinarians and caretakers over the following few weeks. To settle in, he was given some fresh watermelon and honey treats which he thoroughly enjoyed!

In the following weeks, Cam was moved from the quarantine station to one of the bear houses at the sanctuary and was already improving in both mental and physical condition day by day. Although he is still quite a nervous and jumpy bear, easily scared by the sliding doors, you can already see his sweet and friendly nature. He is also very playful and plays all day with his enrichment. His enclosure is opposite bear Mo's, despite him being very to get to know her, and (there was a bit of mutual sniffing), Mo remains a little wary of him and mostly watches him from a distance or completely ignores his attempts of attention! We hope at some point, the two bears will become friends.

With neighbouring enclosures, Cam and bear Mo showed interactions with one another through the fence, so it was decided to socialise the two bears together - it was with great success! Now the two bears have become inseparable! Cam showed the brave initiative at first, stroking Mo gently, who eventually lost her shyness. Now both are are often seen playing and rolling around having a great time. 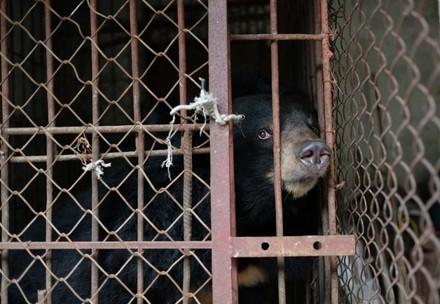 With 15 years of suffering behind her, the Asiatic black bear begins her new life 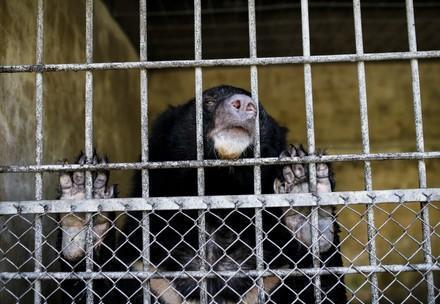 Terrible animal suffering in Vietnam: Bile bears die shortly before they are rescued