Nhi Nho is a female Asiatic black bear, who was born in the wild but was trapped by hunters to be sold to a bile bear farm in Ninh Binh province. She is unable to walk normally due to her missing front paws, which were very likely amputated by a steel-jaw trap or deliberately removed to make bear paw soup or wine. During her 12 years on the bile farm, Nhi Nho endured an unbearable life.

Nhi Nho was kept in a small, rusty cage never seeing the sunlight. She endured extreme suffering from both the terrible living conditions and the bile extraction. In November 2017, Nhi Nho was rescued from a life of suffering, by FOUR PAWS in collaboration with the local government.

We are very happy with how quickly Nhi Nho has adapted to her new environment at our BEAR SANCTUARY Ninh Binh. Even though she is missing her front paws, Nhi Nho has adjusted well to her disability. She really loves to spend time outside, foraging, digging, swimming, and nesting. Regarding her character, we can say that she is curious, calm and she knows how to relax enjoy comfort.

It is almost a miracle that she recovered so well. Thanks go out to everyone who donated towards Nhi Nho's rescue and recovery.

With this new chapter in her life also came a new name: Nhi Nho. Her former name 'Hai Chan' means 'Two Legs' in Vietnamese, and we did not want to continue calling her by a name so disrespectful towards the disability caused to her by humans. Now it was time for her to receive a name with a positive meaning. 'Nhi Nho' means 'playful, cheerful' and was chosen for her because she showed such happy behaviour shortly after she came to the sanctuary.

After the arrival at our sanctuaries, the bears in our care receive regular health checks and medical treatments as needed. For former bile bears, the most common disease is gallbladder inflammation and infection caused by the unhygienic bile harvest methods on the farms.

Although most of our rescued bears respond well to our treatment plan, resolving such gallbladder diseases through medication and diet, unfortunately, this has not been the case for Nhi Nho and Binh Yen. Our veterinarians will evaluate possible alternative treatments, including surgery, and we will keep you posted about the outcome.

It was soon decided that the best option for the health of both formerly bile-farmed bears, Nhi Nho and Binh Yen would be to undergo surgery for their gallbladder disease. The surgeries went well and now both bears have been recovering in the vet clinic for two-weeks. Currently, they are in the bear houses and will remain indoors for a little while, so that they can be monitored closely. At the moment, they are both doing fine and the team is positive that Nhi Nho’s and Binh Yen’s liver and biliary condition will further improve as a result of the surgery. Unfortunately, in the case of Nhi Nho gallbladder and liver disease are not the only health implications that she needs to recover from. Like a lot of other bears rescued from bile farms, Nhinho as well has impaired kidneys. She is monitored closely and receives additional treatment for that condition.

We are so sorry to announce the heartbreaking news that our beloved bear Nhi Nho has passed away. Last week, Nhi Nho’s caretakers noticed some changes in her behaviour that appeared to be neurologic. A health check revealed mammary tumours which had spread to her lungs, with the neurologic signs suggesting that the cancer may have also spread to her brain. Nhi Nho also suffered from other chronic conditions including kidney disease and heart disease which were being medically managed for some time already. The findings during the health check were so serious, that the difficult and sad decision was made to let her peacefully go.

Nhi Nho was an icon of the sanctuary and an ambassador for all the bile bears rescued by FOUR PAWS in Vietnam. Her story reached far and wide and touched the lives of many. She survived for more than 15 years on a bile farm before being rescued in November 2017, by FOUR PAWS, in our first bear rescue in Vietnam. Nhi Nho was the epitome of the stoicism and resilience of her species, despite all her ailments and missing both her front paws, she quietly enjoyed her new life regaining all her natural bear behaviours. A quiet, gentle and friendly bear, she preferred to live by herself. Her absolute favourite pastimes were to swim laps of her pool, watch the world go by on her wooden platform and make comfy nests in the grass to sleep. Walking through the sanctuary at night you could often see her curled up sleeping out under the stars.

Nhi Nho was adored by her caretakers and all that met her. She changed our world as much as we changed hers. She will never be forgotten. 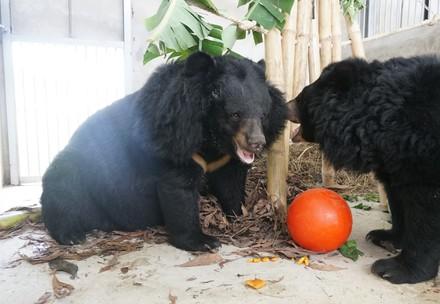 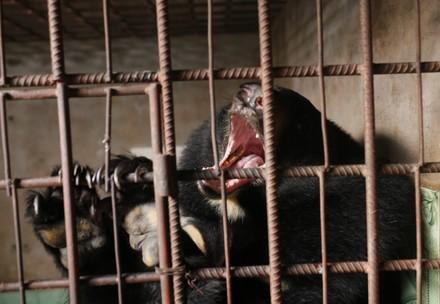