For more than a year the international animal welfare organisation FOUR PAWS, in collaboration with its local partner Jejak Pulang and the Indonesian government, has been running a rehabilitation program for orangutans on Borneo. On 17 May 2018 the FOUR PAWS ORANGUTAN FOREST SCHOOL in East Kalimantan was officially opened.

Now in 2019, the first school year is almost complete. Nine orangutan orphans (six male, three female) from the ages of just a few months to 9 years make up the first cohort of pupils at the 100-hectare forest school, led by Dr Signe Preuschoft of FOUR PAWS, a primatologist with over 20 years’ experience in great ape rehabilitation. Each orphan is likely to have witnessed the gruesome killing of their mothers, and often show remnants of that trauma in their behaviour.

“The goal of the orangutan project in Borneo is to teach the orangutans essential skills so that when they reach the appropriate age in a few years’ time, they can return to their natural environment to live freely and independently.”

A school for these endangered species

It was a great logistical challenge to set up a project in the middle of the Borean rainforest, and the infrastructure of the forest school is still under development. However, it is important that the orangutan orphans spend as much time as possible in their natural environment. At first, the babies had to ride in a ‘school bus’ every day from their sleeping quarters to the forest school.

Now, we have built night-time enclosures which allows the babies to spend as much time as possible being exposed to the sights, sounds and smells of the forest. The older orangutan students have their own camp which allows even more freedom to move and sleep in the forest. At the camps they learn skills from their human caretakers (or ‘foster mothers’) which they would normally learn from their natural mother in their life in the wild. The curriculum includes climbing, foraging, and nest-building.

What is the goal of the FOUR PAWS’ ORANGUTAN FOREST SCHOOL?

The project is financed by FOUR PAWS and is made a reality through the efforts of their Indonesian partner organisation Jejak Pulang (which means “the way home”) as well as the Indonesian Ministry of Forestry. The goal is to provide sanctuary to illegally captured or directly threatened orangutans, as well as to rehabilitate orphaned orangutans, with the ultimate vision of releasing them back into the freedom of the wild.

Where in Borneo is the Forest School?

The forest school is a 100-hectare-large forested area between the cities of Balikpapan and Samarinda. The land provides natural living space for young orangutan orphans, who are taught essential forest survival skills through individualistic therapeutic and rehabilitative methods.

Why do orangutans need to be protected?

The orangutans of East Kalimantan need all the help that they can get. Only about 50,000 Bornean orangutans are left, which denotes an 80 percent decline since 1950. During the same time period some three-quarters of Borneo’s rainforest have been converted for human activities, mainly for industrial agriculture such as oil palm plantations, or extractive activities such as coal mining. This presents the orangutans with two possibilities: starve, or steal food from the plantations. Because of this, the farmers view them as thieves or pests who have to be killed. The helpless orphans are snatched from their dead mothers and are sold or held illegally as pets.

With the support of Jejak Pulang, FOUR PAWS helps these young animals through expert care and individualized rehabilitation, in order to give them a second chance to return to where they belong- the rainforest. Bornean orangutans are listed as critically endangered on the IUCN Red List. We should not forget how similar orangutans and humans are, a fact which makes their survival even more salient for us.

This project concerns itself not only with the rescue of individuals in one species: in their natural habitat, reintroduced orangutans can act as an umbrella species, who through their presence, provide protection for other endangered species such as rhinos, sun bears, proboscis monkeys, and many more.

The Team On Site

The rehabilitation program for orangutan orphans is run by a team of 19 ‘foster mothers’, 3 vets and 2 primatologists. The rehabilitation process is aligned with the natural development of orangutans and includes a science-based curriculum.  Most confiscated orangutans are orphans younger than five years. As babies, these orangutans are too young to live independently. They need human foster mothers to care for and teach them before they can provide for themselves in the wild. Depending on age, mental state and already acquired knowledge, the orangutan orphans begin their education in the forest school at different levels: Kindergarten, Forest School, or the Orangutan Academy. It is important that each orangutan completes the level appropriate to their individual condition and competence, before proceeding to the next stage.

Having lost his mother at 6 months old, little orangutan Gonda is still a nervous boy. With the love ...

Best friends with Gonda, Tegar is already moving fluidly through the ...

Already head of the class, Amalia is a great nest-builder. Help her spend every night in the tree tops!

get to know HER!

Because he loves humans so much, Robin is unreleasable. We need your help to give him a long, fulfilling ...

Kartini has good forest skills and loves looking for food ...

get to know HER!

Baby orangutan Gerhana loves to eat! In a few months, he turned from a malnourished little baby to a ...

Cheeky Eska loves to play-wrestle. He is a good learner but likes attending to distractions (as well a...

get to know HIM!

At 4 years, Cantik is the middle-child of the group. She is a loving older sister to the babies, and a ...

get to know hER!
DONATE 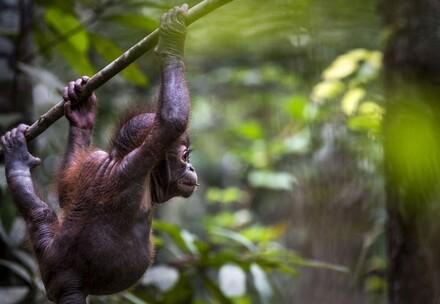 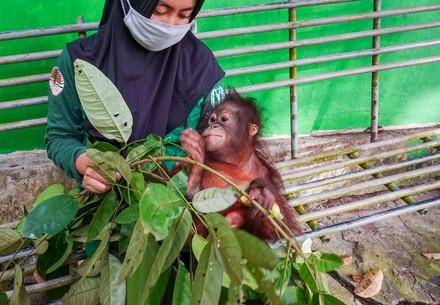