Infant orangutan Indra, arrived at our ORANGUTAN FOREST SCHOOL in Borneo, given into the care of our local partner Jejak Pulang in November 2020, by the Indonesian authorities. The team encountered him at a security post following an invitation by the Bengalon police and military to conduct some education and awareness building better protection for orangutans in that area. When they later continued their trip to find out more about Bhima and what happened to his mother they met the same people who had handed over Bhima after felling the tree in which his mother was hiding. But in Indra’s case they only reported that they saw Indra sitting near the logging road in the morning and still when they returned in the evening. He let them capture him without any attempt to escape. He was injured but not so severe that he could not have escaped, it rather seemed that he was utterly exhausted and at the end of his wits.

For four days he would just sleep and if awake look at the world with saucer eyes, then close them again and retreat into himself. He was very passive, but he did eat and his body did heal. We estimated that he was born in 2017, so his age is around 3 years old. The team at the ORANGUTAN FOREST SCHOOL decided on the Indonesian name Indra, who is the Hindu god of thunder, a very impressive personality in Javanese mythology.

Like all our new arrivals, Indra spent 12 weeks in quarantine. Bhima is more than one year younger plus he had a broken arm so we could not let them play together, but it helped them to see each other, each one in the arms of another caregiver. Indra acted like a much smaller child. Quite soon it became evident that he liked Suli, a caregiver who just started when he arrived.

Please help us to ensure a peaceful future for orangutan orphans

In January, when Bhima’s arm was well on the mend we allowed the two of them to play together supervised. It was a bit hard on Indra because he so wanted to pay wrestle but we could never allow that, fearing that Bhima was too weak and his arm still vulnerable. Bhima, on the other hand, was full of confidence! A little too much confidence…and he did bite Indra rather hard. From this, we could see how important it was that Bhima got corrected by a real orangutan playmate who is not as tolerant as a human surrogate mother.

In February 2021, the two orphans were moved to the Forest School and started to spend their entire days in the forest and sleeping at night in the Portacamp nursery, with their caregiver.

That forest is quite dense and with many fruit trees, so we could see how Indra was going up and down in the trees, sampling the food, and sometimes looked as if he was expecting Bhima to follow him high in the tree, however, Bhima, younger than Indra and, discouraged by his caregivers, was more cautious and just follow him until 2m high.

To give Indra a more balanced life we introduced him to Lestari and Damai, who are of similar age, and with whom he could explore together the high canopy of the forest and play rougher than with little Bhima. After that, slowly, we will be introducing him to other orangutans who have a bit more experience in the trees.

Now, in July, Bhima, Indra and Damai and Lestari are spending their days in different combinations, but they always meet up for breakfast and dinner at a platform where they also socialise. They compete for food and jostle each other, then, satiated, they rest and become drowsy on the laps of the caregivers, all in one heap so you can hardly tell who's arm or foot belongs where. 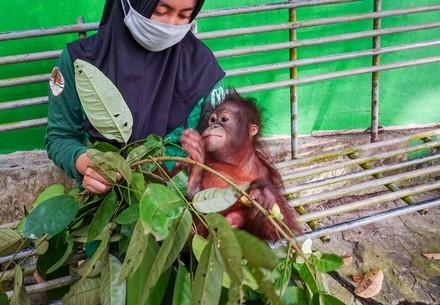 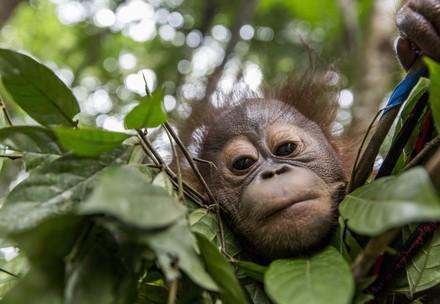 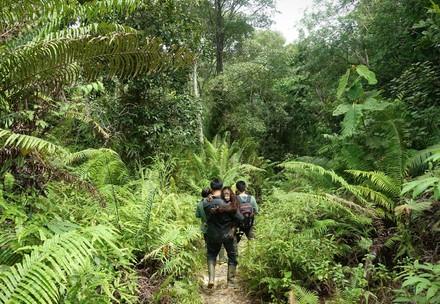 The Penjaga and Pengasuh – The Orangutan Guardians