For these three brown bear cubs, their start in life was rough. The cubs were born in captivity, before being sold onto the Yasnogorodka Contact Zoo, who along with two more cubs, were glorified selfie photo props. Day after day, they had to pose for selfies and pictures and had no chance to do what bear cubs of their age do to develop and grow healthy and happy. It is clear that this is no life for such an animal, especially during their important development years.

Fortunately for these three cubs, animal activists became aware of the situation at the zoo, and after much criticism of the public, they convinced that the owner of the zoo hand the cubs over to White Rock Bear Shelter to prevent a wave of bad publicity to the establishment.

In May 2021, all five cubs moved to the White Rock Bear Shelter in Kyiv, but due to limited resources and space at the shelter, FOUR PAWS offered to take three of the bear cubs into its care. The three cubs, two males and one female, then made a 570 km journey across Ukraine to arrive at BEAR SANCTUARY Domazhyr. Fortunately, the transport went very well and despite being so young, they all coped very well and remained calm for the trip. The cubs, who were since named Jenny, Toby and Moris, have already made a great impression at the sanctuary. They very quickly adapted to their new enclosure and immediately started enjoying their pool and enrichment!

It was quickly discovered that Jenny is the boss amongst the three, she is currently setting the tone and dominating all the games. However, Moris and Toby don't seem to mind at all. Due to their age, the cubs are currently receiving a specific diet appropriate for their growth, all of them have great appetite which is a positive step in their development!

Sadly, because the cubs were bred in captivity and became accustomed to humans already at such a young age, it is not possible to rehabilitate them to be released into the wild. However, at BEAR SANCTUARY Domazhyr the bears will live a fulfilled life and never have to be used for entertainment again.

Just a few weeks earlier, FOUR PAWS rescued two brown bears, Sirko and Ruta, along with their cub five-month-old Andor in Ukraine. Andor cannot be reunited with his parents as they were already separated at a younger age, but Jenny has slowly but surely becoming friends with Andor.

They were spending about an hour in the same enclosure, and both are a bit shy! It came as a surprise for the onsite team as Jenny has been very confident with Moris and Toby. But as Andor is a new friend to her, she is a bit reserved with him. The good thing is that the two bears are not aggressive towards each other, and are quite shy at this stage of socialising, which is normal. The onsite team will continue with this routine until Andor becomes more confident, and then introduce him to Moris and Toby too.

As the socialisation of Jenny and Andor went well, their caretakers decided to introduce all of them. So far it is going very positively! 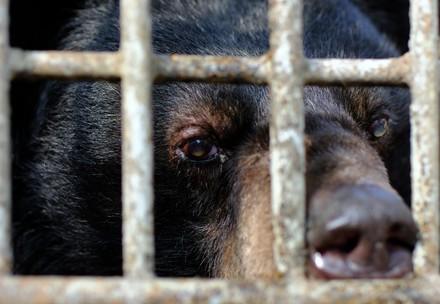 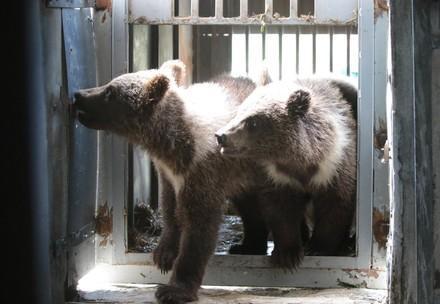