Since 2008, the Animal Protection Law in Bulgaria has prohibited culling as a control method for stray dog populations. However, many municipalities do not have the resources to carry out stray animal neutering activities, and there is little local enforcement preventing pet abandonment. For these reasons, there is still a struggle for humane management of stray animal populations.

FOUR PAWS has employed a local Bulgarian team and been formally providing humane stray animal care in Bulgaria since 2009. Through the success of these activities, an agreement was signed with the municipal authorities to operate a veterinary clinic for stray animals in the capital, Sofia. This clinic has been providing neutering services and veterinary treatment solely for stray animals since 2013. In addition, some stray animals that need extra care are rehomed through a local adoption program.

In addition to the veterinary care provided for stray animals, FOUR PAWS continuously works to improve the negative image that many people have towards stray dogs and cats. Accordingly, FOUR PAWS launched the Animal Assisted Interventions (AAI) program in Romania in 2004 by working with former stray dogs and training them to become therapy dogs. In 2015, FOUR PAWS started the process to expand the program to Bulgaria. A team of experts, including a psychologist and a dog trainer, established the 'Canistherapy' project and obtained a license from the Bulgarian Agency for Child Protection in 2016, allowing them to perform AAI activities in the country.

Currently, there is little legislation or enforcement to curb stray cat populations humanely. Many local citizens feed and care for stray cats living in their cities. In Sofia, it is thought that as the stray dog population has gradually decreased, the stray cat population expanded. This may be partly a result of cats surviving longer and producing more kittens when there are fewer free-roaming dogs around. Stray cats can also reproduce very fast: however, in the first months of their tough life, many kittens become victims of disease, cruelty, accidents, or territorial fights with other cats. Many cities in Bulgaria are facing the problem of growing stray cat populations, but few have programs for humane care and management. This may be because cats are not considered to cause as much noise, waste or territorial problems as stray dogs do or because people are generally less afraid of stray cats than stray dogs. In addition, cats tend to be less visible, as they like to hide and are mainly active overnight.

FOUR PAWS vet teams specifically help stray cats in Bulgaria by providing neutering services and veterinary care for ill and injured stray cats that are brought to the veterinary clinic for stray animals in Sofia.

FOUR PAWS involvement in Bulgaria has become an integral part of our work in Eastern Europe. FOUR PAWS has grown to become one of Bulgaria's most well-known animal welfare organisations. 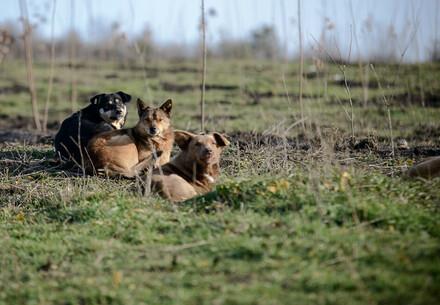