2020, Sunday the 12th of January, Taal Volcano erupted on Luzon Island, the home also to the capital Manila. The volcano is named one of the most dangerous in the world - with around half a million people living with their animals in the 14 km direct danger zone. They evacuated as fast as possible, and luckily the eruption of the volcano allowed them to escape.

A lot of animals, owned and feral, didn't have the same luck. Ash made it hard for them to breath - and thick layers coated everything in sight. The thick and heavy layer destroyed most shelters - it is hard to imagine the horror and fear these animals suffered in these few dark days.

But where animals are in need, there are humans stepping up to help them. One of the groups that took on the challenge was Animal Kingdom Foundation (AKF). They quickly helped organise the quick response- saving many lives. With passing time since the eruption, help is still needed for these animals - and so the organisation stepped up again, providing longer-term food and treatment to the animals who are in need.

FOUR PAWS was invited to join AKF for an assessment of the volcano island to look for more animals in need. Our disaster relief team helped some communities directly with their animals, providing and distributing over 1000 kg of food for pigs, chicken, dogs and cats. When our team came across an injured or suffering animal they helped the local veterinarian buying medicine and treating them.

This great response from many kind human beings has shown yet again to everyone that animals are important for these communities and should not be forgotten when disaster strikes.

“The communities around Taal volcano are just beginning to progress towards recovery after the massive volcanic eruption, our team with our local partner organisation, Animal Kingdom Foundation, are reducing animal suffering by providing lifesaving emergency food and medicine for animals facing this disaster. FOUR PAWS acts to rescue and protect animals in disasters.” 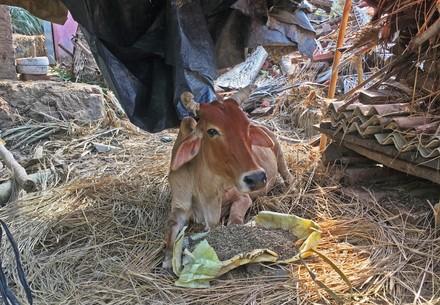