While Thailand may be best known for its beautiful temples, beaches, and delicious cuisine, it hides a dark secret. Throughout the country, millions of stray dogs and cats overwhelm the streets, beaches, and temples. The massive number of stray animals is due to several reasons, for one, according to Buddhist culture, people can make merit by feeding stray animals. This act of kindness helps dogs and cats survive, but it also means that they reproduce much more successfully. This, coupled with very limited low-cost spay/neuter opportunities in most communities, means that millions of dogs are born onto the street each year. In a misguided attempt to manage the stray population, many shelters throughout Thailand attempt to house hundreds to thousands of dogs, which does nothing to actually improve animal welfare.

Trang is a southern province of Thailand, on the west side of the Malay Peninsula. There are thousands of stray dogs in Trang, which are often seen as a public nuisance, potentially contributing to the spread of disease. The condition and welfare of many of the dogs is poor and causes distress among people who wish to stop their suffering. In the past, Trang has also struggled with rabies, a deadly disease which still claims the lives of thousands throughout Asia every year.

In the past, the local government has opted for the mass removal of dogs for managing the dog populations, instead of more humane methods like spay/neuter. This was largely due to a lack of expertise, lack of veterinarians trained in high-volume, high-quality spay/neuter, and the absence of a local charity partner to support and guide their efforts. As a result of years of a catch and remove policy, coupled with Buddhist thinking that forbids euthanasia in nearly all circumstances, the Trang government currently operates an overcrowded, makeshift shelter that is home to around 300 dogs. The lack of disease control, sterilisation, and staffing severely compromises animal welfare for the dogs living there.

FOUR PAWS has teamed up with Lanta Animal Welfare (LAW), a well-respected animal welfare organisation on the island of Koh Lanta, in neighbouring Krabi province. The Trang authorities have previously approached LAW, requesting support to more humanely manage the street dog population, but LAW lacked the necessary resources to get involved. Now, with FOUR PAWS support, the Trang government’s capacity can be significantly improved, with intensive training for veterinarians and shelter staff. The local authority is also being trained in basic shelter protocols, as well as developing a sustainable dog management programme in Trang province. With FOUR PAWS support, the local community is being shown the benefits of spay/neuter and responsible pet ownership, while sick and injured dogs at the Trang shelter are getting the medical treatment they need.

In November 2018, FOUR PAWS teamed up with local charity Headrock Dogs Rescue to help address the suffering of stray animals. The programme involved an outreach team to work with the local community to improve animal welfare in a sustainable way through education and engagement. In and around the city of Bang Saphan, the outreach team would respond to animal emergencies, provide desperately needed medical care, and helps increase pet adoption. The programme also focused on temples, to help improve the living conditions for the hundreds of dogs and cats that call them home. Temple dogs and cats were enrolled in a feeding, vaccination, and sterilisation programme, all at no cost to the temple. The outreach team also worked closely with temple monks and nuns to empower them to provide better animal care.

Outside of the temples, the programme sponsored sterilisation, treatment and vaccination services for pet owners who might not otherwise be able to afford medical care for their animals. For stray animals that were deemed too sick or debilitated to be returned to their home communities or temples, our partner, Headrock Dogs Rescue provided them with ongoing shelter and care until they can hopefully be adopted into a forever home. As a result of our training and support, Headrock is now confidently continuing their efforts to provide high quality spay neuter services, lifesaving emergency response and community education and outreach year round. As the cooperation with FOUR PAWS has drawn to a close, we are happy and proud to have lent our support and expertise to this committed and hardworking group and feel certain that the future is bright for Bang Saphan's dogs.

Since the programme launched in 2018, there have been numerous achievements and developments for the 'forgotten dogs' of Bang Saphan, Thailand. Many hundreds of animals were sterilised and vaccinated, thousands of meals were distributed to hungry strays, countless emergency rescues and treatments were administered by the FOUR PAWS trained local outreach team and more than 150 dogs and puppies found their forever homes. 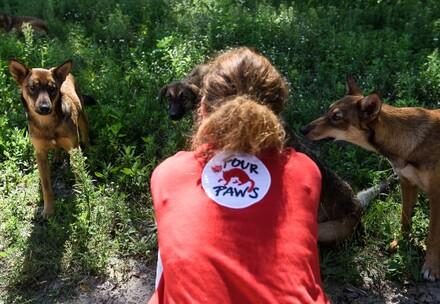 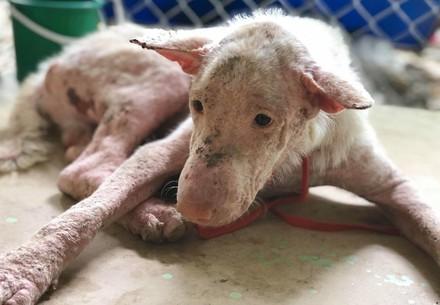 Heartlessly dumped on the streets of Thailand, he was left to fend for himself 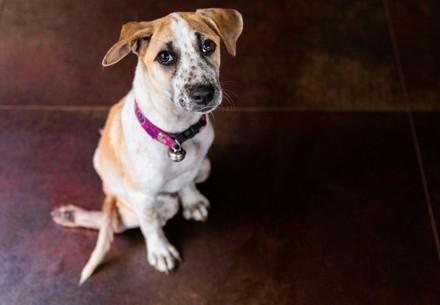